To sort the Grid by any field, click the downward-facing to the right of the field name, and then select Sort A-Z or Sort Z-A. 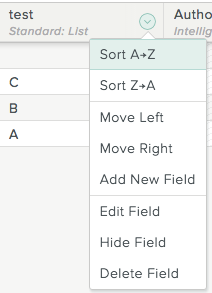 The Grid rows now appear in the sort order you selected.

Note the following about sorting: